No Comments
By Vincent

A Taste Of Whale

“If slaughterhouses had glass walls, everyone would be a vegetarian”.

Should we be outraged by one of the largest open-air slaughterhouses in the world?

Every summer, hundreds of pilot whales are hunted in the fjords of the Faroe Islands. It’s locally known as the « Grind », a spectacular and bloody tradition. International activists would like to eradicate this so that these mammals that are targeted will stop suffering. Knife in hand, the Faroese denounce the hypocrisy of those who eat meat without looking at what is happening in slaughterhouses and at the industries polluting our planet. 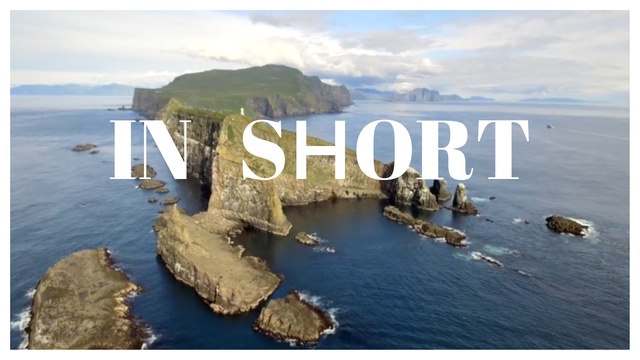 The Faroe Islands archipelago is one of the most beautiful and safest places in the world. Except for the community of whales. Each summer, several hundred Globicephala, mammals of the dolphin family commonly known as pilot whales, are killed in the green fjords of the Faroe Islands.
The “Grind » is a tradition dating back to a time when the inhabitants of these volcanic islands had no other food resource. Without it, the Faroese would have disappeared. Today, the argument of sustenance is non-sense, as supermarkets of the archipelago abound with imported food, even kangaroo from Australia.

Some non-profit organisations denounce what they consider « a massacre from the dark ages associated with macabre entertainment, » as said Capitan Paul Watson of the Sea Shepherd. Several times, Captain Watson’s volunteers risked their lives to save the mammals from the whalers’ spears.
Whales are at the top of the ocean’s food chain. Their health reflects the state of the ocean’s polluted waters. Their flesh is 100 times more contaminated with mercury than that of fish, thanks to our industrial activities.

A large part of the population of 50,000 Feringians still eat this festive dish despite the health risks. It’s hard to pass up free food, especially when it is the pride of the whole community. It is a way to honour their heritage, but also a way to denounce the speciesism and hypocrisy concerning food. At least they are not eating animals that have been raised in little cells, argue the whalers. But is sending us back to our slaughterhouses enough of a reason to continue their tradition?

A WORD FROM THE AUTHOR :

I heard about the Faroe Islands and the Grind tradition for the first time four years ago. I had no idea that one day I could understand this practice and take on board its barbarism, thanks to a reflection that I did not want to have at the time.
I was not particularly focused on animals rights even though I was becoming more and more attentive to the situations concering animals and nature. Meeting my vegetarian wife had a strong influence on me, as she puts human and animal rights on the same level. With each meal I ate, the questions of what the food consisted of and where it was coming from became more important to me.

Why eat meat so often? Why kill to eat, when my wife is healthy without having the death of a single animal on her consciousness? Should we believe the doctors and scientists who swear by animal protein? Like many people, I was shocked by seeing clandestine films of slaughterhouses. Was I ready to face the reality of where the steak or slice of ham on my plate was coming from, knowing fully well that I would not be able to kill one of these animals with my own hands. Did I deserve this meal without looking death straight in the eyes? As a documentary director and citizen, I was revolted by our world’s violence but never really tried to understand what animals were going through.
When I set off to the Faroe Islands with Sea Shepherd in 2014, I couldn’t imagine the opportunity of making a film like I wish to do today. This film will be a rare documentary.

First of all, I benefitted from privileged acces to whalers as well as those who oppose the hunt. Also, I had the opportunity to compare this tradition to how we feed ourselves.
Another privileged opportunity was having the possibility to go into an open-air slaughterhouse and attend a Grind in proximity of those who participated. I was able to capture on film a spectacular and intense moment that upsets and that can not leave indifferent. It dives into the heart of a tormented and condemned tradition, but also shows the most extreme and visible expression of animal killing for their meat.
I was often asked if I was « for » or « against » whaling, as if you had to be in one camp or another, as if it were a simple answer to give, without wondering about our own relationship to food, animals or life. The Grind is a passionate subject that does not leave one indifferent.

So, what is my response? Four years after my first stay in the Faroe Islands, I am more attentive to what I eat. I have not become completely vegetarian, but I am aware that I do not want to eat meat at all costs. And even if I do not rejoice at the death of these whales, I find their fate more enviable than that of cows and pigs killed in our slaughterhouses, which happening far away from our criticism and indignation.

I wish this to be a film is without pretention, that the questions and answers provided or generated are as stunning and striking as the images of the Grind, so that our reason is not distracted by the spectacular, the scattered blood, and so that the whales are respected as they should be.

The Grind is certainly not their biggest problem. Our toxic over-consumption needs, resulting in the pollution of our oceans, overfishing and climate change, are far more dangerous. It is not about making an activist movie for animal conditions nor judging if you are vegetarian, vegan, flexitarian or carnivorous. Eating meat or not can affect our view on the subject. It is up to each of us to question ourselves and to find our own answers consciously, knowing the reality of what is happening in the Faroe Islands and taking into account our consideration for animal life. 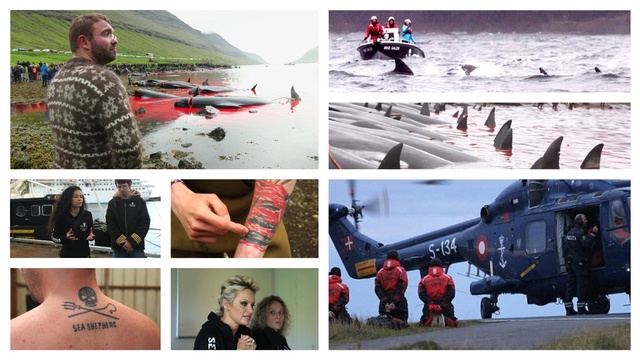 THE PROJECT IN DETAIL

Filmmaker’s view
The Grind is just the tip of the iceberg of a reality that many of us refuse to see. Globalisation threatens indigenous or local cultures. Many hold on with even more determination to what remains of their singular cultural identity. The Faroe Islands are a modern and rich country that lacks nothing. Killing whales is not essential.

If we examine closer, is their tradition not an archaic form of what is going on here, in our slaughterhouses? Like a mirror reflecting our modern industrial practices and frenzy to always eat more and more meat? With one difference, the whalers do not hide behind walls and barbed wire.
Animal welfare associations regularly enter slaughterhouses to film the cruelty and lack of humanity towards the lives that will end up on our plates. It’s hard to say today that we do not know how our pigs, calves and chickens are treated. Recurring scandals such as the « horse meat” one remind us that we do not always control the origin of the meat found in our supermarkets.

Speciesism is also regularly at the heart of discussions and debates. The Grind’s case is part of this reflection. Whatever may be, man would be superior to animals. Is the life of whales more important than the animals on our farms? Should we save the whales without thinking of saving other animals as well? This is one of the main arguments put forward by the Faroese with the idea that they kill, with their own hands, these animals that have lived free their whole life.

Just as important is the impact on our planet and on the marine ecosystem. The Faroese, by importing a large part of their food, know that they are part of the globalisation they criticise. Ferries transporting their consumer goods pollute the oceans. They know that the preservation of their tradition can not be based on the only argument of « eating and consuming locally ». According to them, the debate is taking place in their country, which can not be said of others.

The ocean pollution coming from our industrial activities is a cause of great mortality for the whales, with much bigger impact than the Grind. According to local activists, it is the most likely reason why the country will end its tradition. For the moment, whalers continue to eat poisoned meat as an act of resistance. But if one day they stop killing the whales because of their high toxicity, they will use that opportunity to send a strong message to the other Western countries. 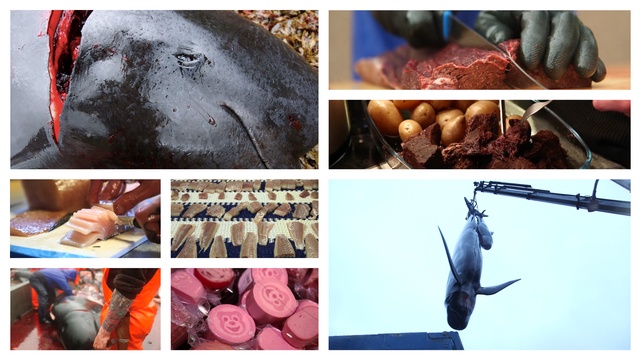 HOW IT ALL BEGAN

In 2014, I heard from my wife, a fervent supporter of Sea Shepherd, that the NGO was launching a « Grindstop 2014″ operation. For more than 4 months, almost 300 activists, both French and foreign members, volunteered to monitor the ocean of the archipelago. Their objective: to prevent, by force if necessary, all hunting of whales that summer. Being an independent director and well versed in the audio-visual world, I received permission from Sea Shepherd to follow their fight. I took the road with the French team, comprised of about thirty people in their motorhomes and pick-ups trucks, towing their brand new boats.

On the way , I remember the comments and images broadcasted by the association. « Hostile and barbaric inhabitants », « frightful massacre », « Dolphins Shoah », and « Nazis » according to Paul Watson, leader of Sea Shepherd. He is a strong supporter of physical action, he left Greenpeace because he found the NGO too shy. I started filming the installation and first tests of the boats. The organisation was impressive. Volunteers monitored hundreds of miles of coastline every day. To better understand what was happening in these islands, and receiving encouragement by the leaders of Sea Shepherd, I decided to go meet these famous barbarians, who up until then were very discreet. To my surprise, the Faroese welcomed me and were ready to talk to me about their tradition. For them, the beaches of their fjords are nothing else than open slaughterhouses. They said that killing whales by hand with primitive tools is actually a barbaric and archaic practice. They were ready to tell me everything.
The summer of 2014 saw only one Grind of 33 whales in the south of the archipelago. The Sea Shepherd volunteers try to intervene but were arrested by the Danish army and therefore could not save the cetaceans.

Even though I could have used images from local TV of the hunt, I could not film it myself, so I decided to come back the following summer to try and get images. It was in 2016, after becoming a dad, that I returned to the Faroe Islands. The situation had changed; the government decided to ban the members of Sea Shepherd from its territory.

On the second day of my trip, a Grind was held north of the archipelago. More than 135 whales will be killed that day in less than an hour in front of my camera. The whalers I met in 2014 were present. I witness that which both Faroese and their opponents call a « real butchery”, a sort of organised chaos that leaves me dumbfounded.

With these rare and hard-to-get images, I know that the film will be possible. 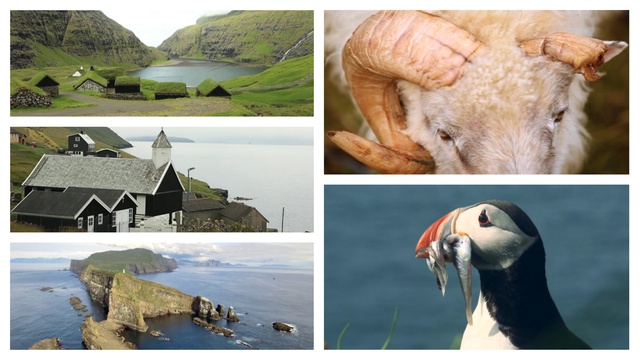 If you want to know more please contact me!

Another trailer if you have 5 more minutes: